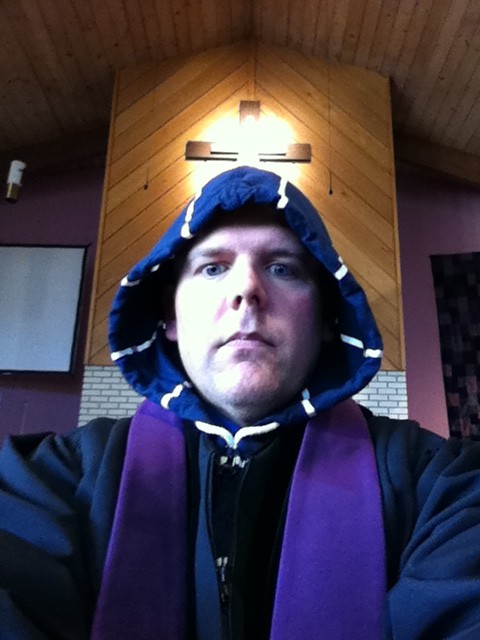 That’s what I asked the children gathered at the chancel area for our weekly conversation, after I removed my robe and stole and put on my hoodie.

Do I look suspicious? Do I look dangerous or threatening? Or do I just look like Pastor Dave with a hoodie on?

They all thought I just looked like myself, albeit wearing odd clothes for a Sunday morning worship service.

That’s what I think too, I just look like me in a hoodie. Unfortunately, the sad, sad truth is sometimes in our country and around the world, sometimes people get scared of other people who look different from them. People who have a different skin color or people who wear different clothes than them.

What do you have to do besides talk in order to have a conversation? [One child responds, Let them talk.] That’s right! And what do you do while they’re talking? [Listen]. Listen, exactly. That’s something Jesus did, he would really listen to people. Even people who were different from him. Even people his friends thought were dangerous, people his friends thought he should have nothing to do with. Do you think Jesus said mean things to people? Hurt them with his words or his actions or his body or with weapons? No, he didn’t. He didn’t.

That’s part of how we conquer that fear: we live that way. We live in the way we want to be treated. Think we can do that? I think so.

Thanks for all the ways you follow and love Jesus.

After that conversation I put my robe and stole back on over the hoodie and kept it that way throughout the rest of the service. I saw some quizzical looks sent my way. I noticed some others chuckling. Still others seemed not to react at all. After worship concluded, a few people asked me about the hoodie. I’m told others were heard asking each other, “Why is he wearing that?”

While I fully acknowledge that it is fairly lame for me to take almost two weeks to offer a response to those legitimate questions, I hope this post will help make sense of my words and actions.

To be honest though, while I was deliberately trying to be subtle while talking with the kids, I expected most of the adults would quickly and easily connect that conversation with current national events.

But it seems my allusions weren’t so clear after all. Or perhaps the news of Trayvon Martin’s murder just hasn’t spread as far and wide as I thought it had.

Has that changed in the nearly two weeks since? I certainly hope so. If you need a refresher, Wikipedia has a terrific and detailed account of the case. Or, to really dive into the racial aspects of the case, spend some time perusing Ta-Nehisi Coates’ posts.

It seems Trayvon was wearing a hoodie the night he was shot to death by George Zimmerman. Geraldo Rivera claims the hoodie made Martin look suspicious and thus, by extension, it was fine for Zimmerman to shoot him.

Obviously I was neither in Florida when the shooting occurred, nor do I have any special insight into Zimmerman’s reasons for fatally shooting a child. That’s not what my conversation and my wardrobe were about.

But I also said what I said and wore what I wore to remind us that in spite of all those sins, as prevalent as they are, we still have hope for the world.

I had that conversation and continued to wear my hoodie to remind us that racism and violence and fear and ultimately even death are not God’s dream for the world. God’s calls us to live a different way; a better way. The way of Jesus: loving God and loving neighbor. Even when – especially when – that neighbor is one we want to call ‘enemy.’

I kept my hoodie on throughout our March 28th worship service because – no matter how silly it seemed to some, nor how confusing it was for others – it was a way for the real suffering of the real world to break through our sanctuary walls and remind us that as followers of God in the way of Jesus, our place is always alongside those who are hurt, dejected, discriminated against, marginalized, or oppressed. Because that is where we find Jesus.

3 thoughts on “Do I look suspicious?”