Skip to content
Today it is tempting to write something like, “I don’t care who you vote for – just vote!”
On one level, I mean it. Nationally, our voter turnout is, frankly, pathetic. 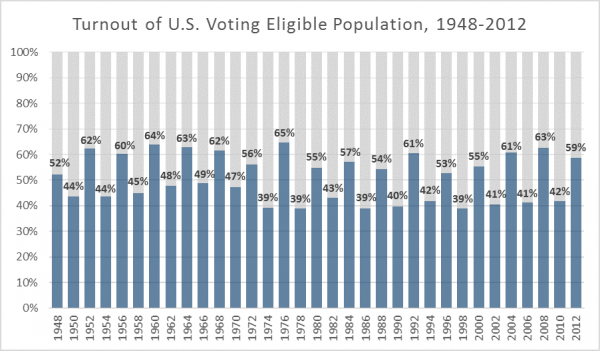 As you can see, since 1948 we’ve never had higher than 65% turnout of eligible voters. Multiple years saw only 39%. If we could get 80 or 90% turnout (as other countries do), at least we’d have a better idea of the actual will of the people. So I can say – and mean it – please, even if you and I vehemently disagree for whom you should cast your vote, go vote today!
However, the fuller truth is I do care. For whom you vote matters to me.
I want our government to do all it can to care for and protect us all – but most especially the most vulnerable among us. As a citizen, as a Christian, as a human being, that’s what I believe government is for. To work for the common good; to be the safety net we all (at least some times) need.
So I support candidates who strive to end hunger, who want all who work to receive a living wage, who seek to protect the civil rights of our LGBT sisters and brothers along with all minority groups, who acknowledge the disastrous reality of climate change and seek to reverse it, who know women are fully human and must not be treated as less than that, who will stand up to the gun lobbies and seek to end gun violence, who want everyone to have good, affordable health care, who will fund efforts to end human trafficking while supporting its victims, who will treat immigrants as the human beings they are and not try to separate their families. Making Bill Foster the easiest pick on my ballot.
I support such candidates because I think that is how we will have the government we need. I want you to support such candidates too. Of course I know not everyone will, but I’m allowed to dream, right?
I suspect that a big part of our voter apathy problem is the way we often “other” government. We act as if government is this sentient being that exists independent of our input. But isn’t government just us? I think if we forced ourselves into the habit of using first person plural pronouns when referring to government, it might help. It’s our government. We decide it. Government is us…like that. Perhaps that would help us feel more connected to – and thus take more responsibility for – deciding to vote and for whom to vote.
So, did you vote today?