This Sunday night is the first trial run for a new alternative worship gathering at my church. I’m definitely experiencing that typical emotional cocktail of excitement (We’re doing something new! An idea of mine that others have helped birth!) and nervousness (What if no one attends? What if we suck? What if we think it’s great but no one else does?).

This alternative worship is one answer we’re attempting to the question, What will WUMC do in 2012 to reach people unattached to a church? Of course it could also be an answer for people who are already attached to our church but are looking for a different worship experience than we offer on Sunday mornings. “Alternative” here does not mean all the music will sound like Rise Against or Young the Giant or Silversun Pickups. (Though, personally, I’d enjoy it if it did mean that!) Rather, “alternative” means it will look, sound, smell and feel different from our existing Sunday morning worship services.

What exactly will those difference be? We can’t know yet. Those answers will reveal themselves as we go. I hope. So, we giving it a go. Offering an alpha test. Pitching a pilot. Experimenting. But with an open audience. Anyone is welcome. We’ll offer feedback forms. We’ll evaluate and try again January 8.

As it happens, I ran across three separate posts thinking about these kinds of new ventures. I recommend all three to you. They are certainly informing my thoughts this week.

Darby Jones of United Methodist Communications offers 5 worship trends for the unattached. Money quote: “Constantly question the theology behind everything you do from song choices to the welcoming introduction to when the worshipers sit and where the leaders stand.”

My friend, Steve Knight, asks Are we on the verge of participatory church? Money quote (by Dr. Ryan Bolger):

“The shift from postmodernity to participatory culture means people find their identity through what they create as opposed to maybe what they consume. … Our churches are still structured in such a way that we do it to them, not inviting them to create worship with us. So, if that’s the case, there’s really no space for people who’ve been formed by our participatory culture in our churches.”

Finally, Magpie Girl, Rachelle Mee-Chapman, offers a response to Knight: Why churches aren’t relig-ish. (Even the hip ones.) Money quote:

I’ve been working with SBNR folks for a goodly number of years now, and you know what? I don’t know a one of them who truly feels comfortable in a church. Not an old school ritual-based church. Not a new-fangled pop-music-and-candles church. Lots of people do feel comfy in both of those settings. (Huzzah! More power to you!) And lots of SBNR folks do go to those kind of churches. They just don’t feel especially right-fit behind the double doors. It’s kind of like when you really want sushi, but you are in the middle of a corn field in a landlocked state, so you end up eating chicken-fried steak and eggs. It’s not bad. It fills you up. Other people like it a lot. But it’s not sushi.

If churches are so very interested in making space for the None’s/SBNRs, then why aren’t more of those folks feeling at home there? Because I know a lot of emergent pastors, and I know they are trying to makes space for “the other.” They really really are. So why isn’t it working? I’d like to offer 6 reasons, all of which I’ve observed over several years of working with just such a relig-ish population. First problem, The Other…

One practice we aim to embody in our worship experiment is a more participatory sermon time. But that means I need to provide at least some of what I’m thinking about. Before Sunday. But that means I must have thoughts before Sunday. Didn’t do so well with that this time. But, hey! At least I know what one thing we need to improve going forward!

Here’s what’s on my mind as I prepare a sermon I’m calling, Lifted Up? 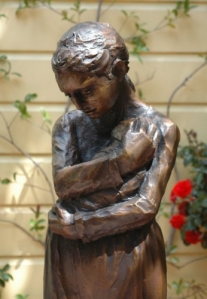 Our text is Mary’s Magnificat: Luke 1:46-56. That’s the NRSV. Here’s another version I like called The Voice New Testament:

Mary: 46My soul lifts up the Lord! 47My spirit celebrates God, my Liberator! 48For though I’m God’s humble servant, God has noticed me. Now and forever, I will be considered blessed by all generations. 49For the Mighty One has done great things for me; holy is God’s name! 50From generation to generation, God’s lovingkindness endures for those who revere Him. 51God’s arm has accomplished mighty deeds. The proud in mind and heart, God has sent away in disarray. 52The rulers from their high positions of power, God has brought down low. And those who were humble and lowly, God has elevated with dignity. 53The hungry—God has filled with fine food. The rich—God has dismissed with nothing in their hands. 54To Israel, God’s servant, God has given help, 55As promised to our ancestors, remembering Abraham and his descendants in mercy forever. 56Mary stayed with Elizabeth in Judea for the next three months and then returned to her home in Galilee.

Here’s some notes from The Voice on this section of scripture, notes that I find especially cogent:

Mary is deeply moved by these amazing encounters—first with the messenger and then with her cousin, Elizabeth. Mary’s response can’t be contained in normal prose; her noble soul overflows in poetry. And this poetry isn’t simply religious; it has powerful social and political overtones. It speaks of a great reversal—what might be called a social, economic, and political revolution. To people in Mary’s day, there is little question as to what she is talking about. The Jewish people are oppressed by the Roman Empire, and to speak of a King who will demote the powerful and rich and elevate the poor and humble means one thing: God is moving toward setting them free!

Some thoughts and questions:

Have you ever been disappointed in a Christmas gift?

As a kid, was there anything worse on Christmas than opening up a gift that you thought was for sure going to contain a toy, and finding clothes inside instead?!?

Listening to our choir’s cantata last week, I thought about this scripture when they sang, “the Bread of Heaven fills the needy.” I thought, yes! That’s what God is supposed to do. Like Mary sang, “the lowly are lifted up…the hungry are filled with good things”

Then I thought, but wait… that’s not really the case right now, is it?

So you tell me, are the lowly lifted up and the hungry filled with fine food?

What do we do with this gap between how the world is and how God wants it to be?

What do we do when God disappoints us?

At least one way to resolve this conflict is to reject the note above, to take it out of the realm of the political, economic & social. We “spiritualize” the conflict in order to make it go away. That is, we say – and I actually heard someone say this this week – what Mary proclaims there is what happens in Heaven after you die.

Well, I don’t know about you, but I don’t find that satisfying at all.
In fact, it rather irritates me. Like the author of the note above, I’m convinced Mary was speaking of change in the real world. I’ve often said the Christian faith is inherently political – when our ancestors in the faith declared that Jesus is Lord, they were very clearly saying that Caesar is not. That’s treason!

That’s the political, social and economic world. The real world.

It seems to me, the answer is us. God seems to work in the world almost exclusively through people.

What do you do with the gap?

One thought on “Sermonating for Sunday…night!”