That, dear reader, is a hat trick of blog post subjects for me if ever there was one. I determined I would write a post on the 270 kidnapped Nigerian school girls and the global response, hashtag #BringBackOurGirls. I had the lede written in my head by the time I finished walking our kids to school. A concluding call to action was simply a given.

But before I could actually write it, a few links about this story came across my feeds. I clicked on one. That link led to other links. Instead of writing, I read.

Finally something occurred to me. Something as important as it is obvious.

I don’t know a damn thing about Nigeria.

To paraphrase Col. Nathan R. Jessup, I’m an educated man, but I don’t know the first thing about the socio-economic, religious or political realities of Nigeria. I have no business suggesting a course of action.

Instead, how about we let Nigerians speak for themselves? How about we listen to those who are actually there? Some of these stories are a little longer than the typical internet post. They may take some investment on your part to get through them. They are difficult reads about horrific – though all too real – actions. Yet, we live in the world that is even as we strive to let God’s Holy Spirit work in and through us to create the world as God intends. Let us not turn a blind eye or a deaf ear – or an ignorant tongue – to the suffering of our Nigerian sisters and brothers.

Here then, are a few articles I’ve happened upon. Please share others in the comments.

From where were the girls taken? 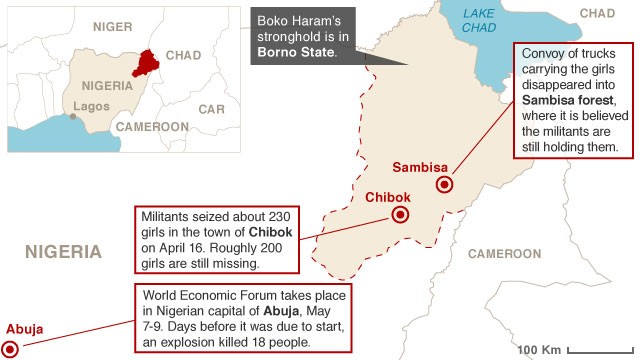 I thought it was the end of my life,” Deborah Sanya told me by phone on Monday from Chibok, a tiny town of farmers in northeastern Nigeria. “There were many, many of them.” Boko Haram, an Islamist terrorist group, kidnapped Sanya and at least two hundred of her classmates from a girls’ secondary school in Chibok more than two weeks ago.

Much as we might wish this to be a singular issue with a clear solution, it isn’t and cannot be. It never was.

This kidnapping isn’t the first act of terror by Boko Haram. Or the Nigerian government.

An increase in attacks by Boko Haram and uncontrolled reprisals by Nigeria’s security forces has seen the death toll in North East Nigeria rise to at least 1,500 people, more than half of whom are civilians, in the first three months of 2014.

The kidnapping wasn’t the last act of terror by Boko Haram.

Dozens of militants wearing fatigues and wielding AK-47s and rocket-propelled grenade launchers descended on the town of Gamboru Ngala, chanting “Allahu akbar,” firing indiscriminately and torching houses. When it was over, at least 336 people had been killed and hundreds of houses and cars had been set on fire, said Waziri Hassan, who lives there.

Nigeria is an incredibly complex place.

This is twisted but true: attention itself can be the reward Boko Haram seeks, as it too often the case with groups like that which terrorize their own region. Rewarding their thirst for attention can lead them to repeat the same act that worked so well before. Kidnap girls, which perhaps unexpectedly generates global outrage this time, but now the Great Satan is involved: rinse, repeat.

The latest: Nigerian officials know the attack was coming and couldn’t stop it.

After independently verifying information based on multiple interviews with credible sources, the organization today revealed that the Nigerian security forces had more than four hours of advance warning about the attack but did not do enough to stop it.

So what can we do? Read, learn, listen, speak, pray.

May the God of the universe, who yearns for peace with justice for all humanity be served by me, by you, by the people of Nigeria, by governments near and far, by all.

One thought on “#BringBackOurGirls”